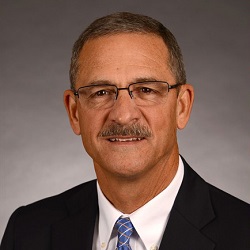 Dr. Andrews served as President of Morehead State University (KY) from January 2005 until his retirement in June 2017. During his tenure, he oversaw the university reaccredited in 2011, and the establishment of the doctoral program in education. He was instrumental in establishing the Craft Academy for Excellence in Science and Mathematics, a dual-credit residential high school for academically exceptional Kentucky students on MSU’s main campus. Five state-of-the-art buildings were built during his tenure including the Recreation and Wellness Center, Center for Health, Education and Research, the Equine Health Education Center, Andrews Hall, a 550-bed suite-style residence hall and the Space Science Center. During this time period, the University refreshed six residence halls and built two new suite-style halls at the University Farm.

Prior to becoming the President of Morehead State University, Andrews spent 17 years at East Tennessee State University. He served in a variety of roles including, Chairman of the Department of Engineering Technology, Executive Assistant to the President, VP for Student Affairs and VP for Administration and Chief Operating Officer.
He served as a faculty member at Illinois State University from 1977-1987.

Dr. Andrews was an ACE Fellow in 1992-93. He was actively involved in the American Association of State Colleges and Universities (AASCU), The Accrediting Board for Engineering and Technology (ABET), The Southern Association of Colleges and Schools (SACS) and was appointed by the Governor of KY to serve as a member of the Southern Region Education Board (SREB). He twice served as the President of the Ohio Valley Conference.